It was a fourth of July to remember for a few boys! They didn’t see great fireworks but their FIRST MARLINS! On the “Stalker” Captain Steve Moore released 3 white marlin and had a VERY proud moment this afternoon as his son Parker released his first white marlin!!! Congrats Parker!!! Small world, Parker’s cousins Dane (age 8 ) released his first blue marlin and Brody (age 11) released his first white marlin on the “Moore Bills” with Captain Rob Skillman! All took their cerimonal swims in the marina! Congrats boys we are all so happy for you!!!! The “Moore Bills” also released another white marlin and returned with a few yellowfin! The “Playmate” proved that we still have some tuna and dolphin around returning to report 2 yellowfin and some mahi!!!
On the “Get Sum” Captain Nick Clemente had a 1/2 bushel of crabs and 3 keeper flounder.
Don’t miss your opportunity to fish with Ocean City’s Premier Charter fleet book your trip today!!!
If you would like to make a reservation or have any questions we would love to hear from you!!! Please feel free to give us a call!!!
(410) 213-1121 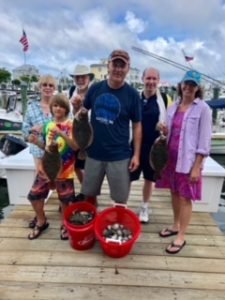