With 48 total boats out yesterday we were busy cleaning tuna and fueling last night, we apologize for the delay in the fishing report. Tuna are still and the dolphin (mahi-mahi) have started to make more of an appearance. Captain Rob Skillman of the “Moore Bills” returned with 11 yellowfin in the box. Captain Jeremy Blunt of the “Wrecker” ended his day with a total of 3 yellowfin and 2 dolphin(photo). On the “Talkin Trash” captain Chris Little put 3 yellowfin and a dolphin in the fish box before the day was over. Captain of the “Spring Mix II” Chris Watkowski reported a total of 3 yellowfin tuna. A couple more yellowfin (2) found their way into the fish box on the “Bill$ 4 Bills” with Captian Ron Callis. The “Game On” with Captain John Yost returned to report a nice yellowfin and some dolphin. The “Finatic” with Captain Mark Malamphy had a similar day ending with a yellowfin and 2 dolphin. Aboard the “Husevo” Captain Mark Robbins sent a yellowfin and 3 dolphin to the fish cleaner.
We had plenty of private boats head offshore today. Our slip holders in A-48 returned all smiled because they had successful day offshore returning with 4 yellowfin. Captain Mark Radcliffe fishing on the “Blue eyed lady” came home with 3 yellowfin in the box. On the “Luna-Sea” Captain Larry Dougherty reported an even 2 yellowfin and 2 dolphin.
Closer to the beach anglers of our bay headboat the “Bay Bee” with Captain Cale Layton caught their dinner and show; catching 8 keeper flounder in the afternoon all while watching the Ocean City Air show (photo). Anglers on the “Get Sum” with Captain Nick Clemente had a similar day! Nick had 3 keepers yesterday on his morning trip and very happy customers (photo)!
Fishing is still awesome! Don’t miss your opportunity to fish with Ocean City’s Premier Charter fleet book your trip today.
If you would like to make reservations or have any questions please feel free to give us a call we would love to hear from you!
(410) 213- 1121 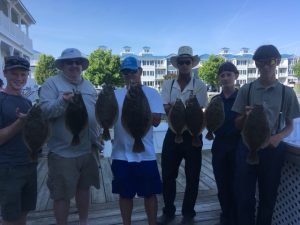 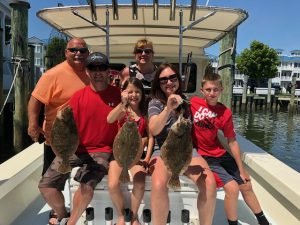 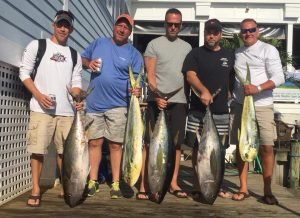