Today was a great day for tuna at the Ocean City Fishing Center! The “Moore Bills” returned today with 2 big eye tuna one weighed in at 216 pounds and the other at 130, the big were accompanied by 8-10 nice yellow fin. Even more yellow fin were landed on the “Playmate” with Captain Jeremy Shandrowski who returned with 21 yellow fin and a big eye. Aboard the “Game Over” with Captain Steve Pfieffer the crew returned with a report of some tuna and really nice dolphin. Our other charter boats including the “Jade II” and the “Foolish Pleasures” also report yellow fin, big eye, and dolphin. One of our private boats the “Luna-sea” with Captain Larry Dougherty had an awesome day with 27 yellow fin, limiting out, and a really nice mako! (photo)In the bay today throwback flounder were high in number, keepers were harder to find. The “Bay Bee” with Captain Cale Layton had a successful day ful of throwback flounders. Captain Nick Clemente on the “Get Sum” also reported throwback flounders but plenty of crabs and clams on his two trips. Overall the fishing is great right now and the tuna are definitely still biting. So make sure you book your trip with Ocean City’s premier charter fleet before the kids head back to school! If you would like to make a reservation or have any questions please feel free to give us a call or stop on in we would love to hear from you!!! (410) 213 1121 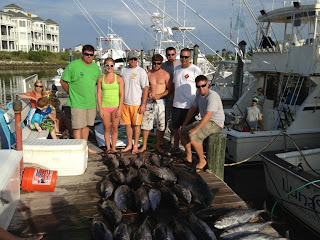