We saw almost every species of fish today and the fishing seems to be picking up. Captain Rob Skillman on the “Moore Bills” had a phenomenal day today and returned with 2 big eye weighing 161 and 127 pounds, along with a 49 pound yellow fin, eight others, and plenty of mahi. (see photo) Captain Jon Yost on the “Game On” while fishing the mid-atlantic 500 released 2 white marlin. The “Last Call” with Captain Franky Petollina had 20 nice gaffer dolphin that filled the box! Aboard the “Bill$ 4 Bills” Captain Ron Callis had a great day and returned with golden line tilefish, blue line tile fish, black sea bass, black bellied roses, and some nice dolphin. On the private boat the “Top Dog” the crew who also fished the mid-atlantic released 2 white marlin today. Closer in shore Captain Mark Sampson on the “Fish Finder” had a good day releasing a variety of shark species!! In the on the “Bay Bee” Captain Cale Layton had a great trips today with throwbacks and a few keepers. Captain Nick Clemente on the “Ivy Sea” ventured out to the wrecks in the afternoon and had some really nice keepers. (see photo) On the “OC Guide Service” Captain John Prather reported good flounder fishing as well! Fishing is a great way to finish out the summer and it doesn’t stop once school starts book your trip with Ocean City’s Premier Charter Fleet today!!! If you have any questions or would like to make reservations please feel free to stop on by or give us a call we would love to hear from you! (410) 213 1121 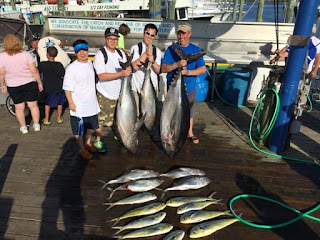 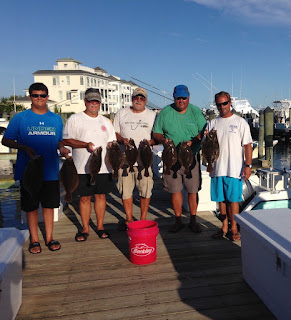