OFFSHORE: The bite was definitely at the Baltimore Canyon today. All of our boats worked the canyon and returned with nice sized tuna. First to arrive back was the “Moore Bills” with Captain Rob Skillman who returned from an overnighter with 3 big eyes that weighed in at 196, 194, 183 & 183 pounds along with 6 yellowfin all about 50+ pounds. (see photo) High hook goes the crew aboard the “Playmate” with Captain Jeremy Shandrowski who returned with a total of 8 yellow fin tuna after a full day of fishing at the tip of the Baltimore. (see photo) The “Spring Mix” with Captain Chris also had a great day today releasing a white marlin, returning with 3 yellow fin, and a 21 pound dolphin, earning the leaderboard position. Captain Chad Meeks ran the “All In” today to return with 6 yellow fin tuna. More yellow fin were caught on the “Game Changer” with Captain Fred Husman who also fished the Baltimore today. Captain Dale Lisi on the “Foolish Pleasures” and Cpatain Mark Robbins on the “Husevo” also had some tuna and dolphin action today!!! Don’t be fooled not all the action was the Baltimore today. The “No Limit” caught their tuna at the Baltimore but then traveled to the Poorman”s to release a white marlin and catch a few dolphin! One of our private boats the “Two-Timing Connie” had an early season wahoo along with some yellow fin and a dolphin. INSHORE/BAY: On an inshore trip at the wrecks and the reefs the “Reel Addiction” saw heavy sea bass and flounder action returning with 6 keeper flounder. Captain Mark Sampson on the “Fish Finder” released 2 Duksy, 3 Spinner, and a sandbar shark today. Flounder fishing in the bay was not as stellar as it has been but customers were happy with the all of the throwbacks. With a little bit of murky water we have found that the pearl and the pink Gulp! have been working best! Father’s Day is quickly approaching gift Dad a day of fishing and book your trip with Ocean City’s Premier Charter Fleet. If you have any questions or would like to make a reservation please feel free to stop on in or give us a call we would love to hear from you!!! (410) 213 1121 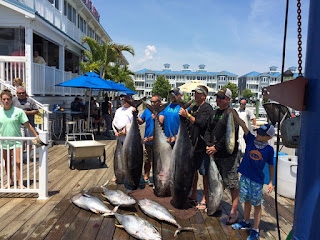 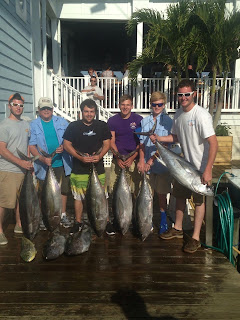