OFFSHORE: The parking lot was full and the slips were empty during the afternoon today, which meant boats were fishing! We had a busy evening and plenty of reports. The “Playmate” with Captain Jeremy Shandrowski returned today with 2 white marlin releases and some dolphin after a full day at the Washington. Just a few slips down Captain Jeremey Blunt of the “Wrecker” had a successful day with 2 white marlin releases, 2 blue fin tuna, and a handful of dolphin. On the “Playtime” today Captain Ron Taylor had a white marlin release, a yellowfin, and very nice dolphin among decent tuna action. More tuna, 2 yellow fin, were caught today aboard the “Last Call” with Captain Frank Pettolina who also reported plenty of dolphin. On the “Muff Diver” Captain Wayne Bradford reported a blue fin, a yellow fin a cart full of dolphin. Captain Fred Husman on the “Game Changer” had a similar report consisting of 2 blue fin tuna. Another blue fin was brought back today along with some dolphin by the “Moore Bills” with Captain Rob Skillman. Captain Mark Robbins on the “Husevo” returned with high numbers of good sized dolphin, one large enough to take to the scales for the Canyon kickoff tournament. Good luck to you Captain Mark and the crew of the “Husevo”! We had a handful of slip holders who fished today and also had great days. The “Talkin’ Trash” had an exceptional day today and returned with 3 very nice blue fin tuna, 2 yellow fin, and 22 dolphin (see photo). Captain Wayne Lauman on the “Fugitive” also had an exciting day today with a white marlin release and a handful of good sized dolphin. The “Skirt Chaser” reported a white marlin release and 2 dolphin at the end of their day. INSHORE: The “Bay Bee” with Captain Cale Layton had good trips today with plenty of throwbacks and a few keepers between the two. Captain Nick Clemente on the “Get Sum” had a great morning with 9 keeper flounder and 4 in the afternoon (see photo). Both trips were also filled with throwbacks, crabs, and clams. Aboard the “OC Guide Service” Captain John Prather reports keepers and high numbers of throwbacks among all his trips. Right now the fishing is really starting to pick up, the tuna and the marlin are here along with the dolphin! Don’t miss your opportunity to fish with Ocean City’s Premier Charter Fleet and book your trip today! If you have any questions or would like to make a reservation please feel free to stop on by or give us a calol we would love to hear from you!!! (410) 213 1121 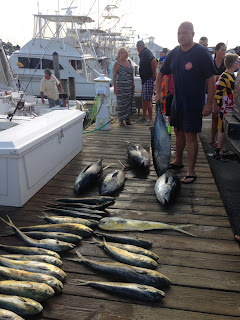 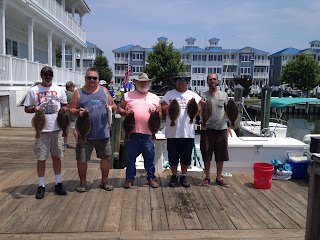