OFFSHORE: After a busy day yesterday, it seemed to be just a little less chaotic today! We had a few boats go out today some of which were in the Canyon kickoff tournament put on by the OC Marlin Club. The “ Game On” with Captain Jon Yost had a phenomenal day today and returned with 6 yellow fin tuna, 2 blue fin tuna, and a handful of good sized dolphin, he also reports releasing several other tuna. Captain Frank Pettolina on the “Last Call” reported a white marlin release and some dolphin. On the “Bill$ 4 Bills” Captain Ron Callis did not disappoint and returned with plenty of blue line tilefish, a very nice sized blue fin tuna and a cart full of dolphin. On one of our private boats the “Top Dog” with Captain Todd Dickerson, Trent Dickerson is becoming quite the angler as he released a white marlin today and caught a handful of dolphin. Captain Wayne Lauman on the “Fugitive” provided a report similar to everyone else returning with a blue fin and some dolphin. INSHORE: Captain Jeremy Blunt of the “Wrecker” took a break from offshore fishing today and took two half day inshore shark trips. Mate Brain Behe reported that between both trips anglers released lots of sharks, mostly spinners! As always on the “Fish Finder” Captain Mark Sampson reported releasing a variety of shark species. Captain Cale Layton on the “Bay Bee” had a keeper on his morning trip and numerous throwbacks thr5oughout the day. On the “OC Guide Service” Captain John Prather reported 2 keepers in the morning and 4 in the afternoon among plenty of throwbacks. (see photo). The “Get Sum” with Captain Nick Clemente also kept customers busy reeling in fishing today, with ample throwbacks! Next week the 28th annual Ocean City Tuna Tournament will begin. Weigh-ins will be held Friday, Saturday, and Sunday here at the Ocean City Fishing Center from 4:00-7:30 on Friday & Saturday and ending at 7 on Sunday. It is expected to be a great tournament. Weigh-Ins are fun for everyone in the family so please join us! If you would like to make a reservation or have any questions please feel free to stop on by or give us a call we would love to hear from you! (410) 213 1121 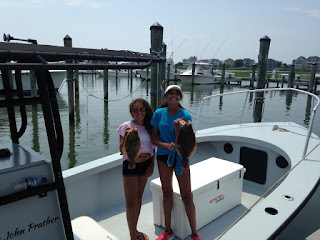 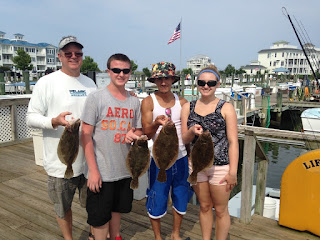