OFFSHORE: After such an awesome day yesterday we had a total of 26 boats leave the fishing center today! The bite was not as hot today as it was yesterday but the fish are still there! Captain Jeremy Blunt on the “Wrecker” took high hook today with 5 yellow fin tuna after trolling at the north end of the Baltimore. (see photo) Close behind was the “Game On” with Captain Jon Yost who returned with 3 yellow fin tuna. The “Husevo” with Captain Mark Robbins had the same report but added a few dolphin to the fish box. Captain Ron Callis aboard the “Bill$ 4 Bills” returned with 2 yellow fin, some dolphin, and of course plenty golden and blueline tilefish! Captain Dale Lisi on the “Foolish Pleasures” arrived back at the dock early for him, but on-time with 2 yellow fin. Another boat that trolled the Baltimore today the “Playmate” with Captain Jeremey Shandrowski also had some yellow-fin and dolphin in the fish box. White marlin are still making an appearance and Captain Mark Diemler on the “Reel Attitude” reported a white release and brought back a few mahi for dinner the next few nights! Some of our private boats such as the “Wayne’s World” and the “Jet Lag” also had success today and returned with yellow fin and dolphin. INSHORE: The tide appeared to be in the afternoon today, with a majority of the larger fish being caught in the afternoon. Flounder seem to still be giving preference to the pearl Gulp! Captain Cale Layton on the “Bay Bee” had throwbacks in both the morning and the afternoon but snagged 3 keepers in the afternoon! Also in the bay today Captain Jon Prather of the “OC Guide Service” had a fun filled afternoon and brought in a nice 14 pound rockfish along with a keeper flounder. (see photo) His report also consisted of plenty of throwback flounder! Aboard the “Get Sum” Captain Nick Clemente had satisfied customers all day! His morning trip had throwbacks and his afternoon trip had a keeper flounder. Remember that fishing trips make great graduation and father’s day presents! Don’t miss your opportunity to fish with Ocean City’s Premier Charter Fleet and book your trip today!!! If you have any questions or would like to make a reservation please feel free to stop on in or give us a call we would love to hear from you!! (410) 213-1121 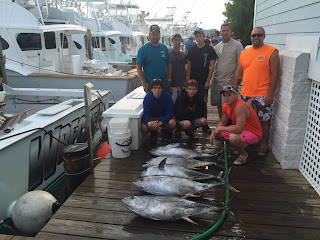 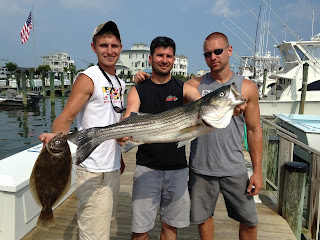