OFFSHORE: We have been hearing talk of a good white marlin bite at the canyons, and today the “Game Changer” with Captain Fred Husman showed us that the whites were at the Baltimore. They went 5 for 9 on whites, returned with 2 yellow fin and some nice dolphin. Don’t be fooled the tuna are still around Captain Jeremey Blunt on the “Wrecker” returned with 9 yellow fin tuna 3 nice gaffer dolphin, and released a white as well (see photo). A few more yellow fin were seen from the “Game On” today with Captain Jon Yost accompanied by some good sized dolphin. Aboard the “Jade II” a similar report was produced and the crew returned with 3 yellow fin and 2 nice dolphin as well. Both the “Last Call” with Captain Franky Pettolina and the “Fugitive” with Captain Wayne Lauman both returned with good numbers of dolphin. INSHORE: Today Captain Mark Radcliffe ran the “Bay Bee” which had 2 keeper flounder in the morning and 3 in the afternoon along with plenty of throwbacks and smiling faces. On the “Get Sum” Captain Nick had a crew of younger anglers who met the challenage and landed some nice flounder this mornings (see photo). Captain Jon Prather has had a good last few days, and while his morning trip didn’t have any keepers they had ample throwbacks to keep everyone happy on the “OC Guide Service.” Fishing trips make great father’s day presents for anyone who waited until the last minute!!! Don’t miss your opportunity and book your trip with Ocean City’s Premier Charter Fleet today!!! If you have any questions or would like to make a reservation please feel free to give us a call or stop on in we would love to hear from you!!! (410) 213-1121 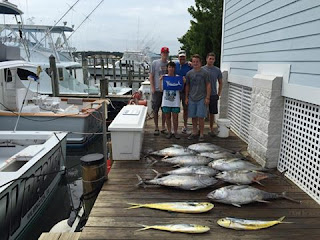