OFFSHORE: Empty slips and a full parking lot signs of a busy day of fishing! At least four of our boats fishing today set out on overnight trips and will return tomorrow, hopefully with great fishing reports so check back tomorrow! Tuna took the show last week, this week it has shifted to more white marlin, and dolphin. One of our private boats the “Talkin’ Trash” returned from their overnight trip tonight with a 246 pound mako shark, 3 nice yellow fin and some dolphin. (see photo) The mako takes the new leaderboard position here at the fishing center, congrats!!! The “Game Changer” with Captain Fred Husman had a good day today with a white marlin release, and some dolphin. Captain Todd Dickerson on the “Top Dog” had a successful day today with a white release, 2 yellow fin and some dolphin. Another white was released with Captain Chris on the “Spring Mix II” the crew also managed to catch some dolphin as well. Captain Franky Petttolina on the “Last Call” had a wheelbarrow full of dolphin and more dolphin were seen on the “Moore Bills” with Captain Rob Skillman. Travis Piscitella on the private boat the “Soggy Dollar” brought in the largest dolphin today weighing in at 27.5 pounds and snagged the new leaderboard position! On inshore trips Captain Mark Robbins on the “Husevo” had a busy day with sea bass and dolphin. While the bite has slowed just a little offshore Captain Ron Callis on the “Bill$ 4 Bills” proved that there was a good catch to be had inshore. He returned with both types of tilefish, and good numbers of sea bass. Tilefish were also caught on the “Fugitive” today with Captain Wayne Lauman and accompanied by some seabass and yellow fin tuna. INSHORE: On the “Fish Finder” Captain Mark Sampson released a variety of shark species today including dusky, spinner, sharpnose, and sandbars. After a few days of red hot flounder fishing it slowed just a little the last few. The “Bay Bee” had keepers on both trips with 2 in the afternoon, along with plenty of throwbacks. Captain Nick Clemente on the “Get Sum” is reported 2 keepers in the morning, and 7 in the afternoon. On the “OC Guide Service” Captain John Prather had a couple keepers in the morning, 10 rays bowfishing in the afternoon and 2 in the evening. Both captains report high numbers of throwbacks! Tomorrow the “Wrecker” “Muff Diver” “Foolish Pleasures” and “Game On” will be returning from their overnight trips! Check back for updates. Fishing is still great and we anticipate it to get even better as the summer continues. Don’t miss your opportunity to fish with Ocean City’s Premier Charter Fleet and book your trip today! If you have any questions or would like to make a reservation please feel free to stop on by or give us a call we would love to hear from you! (410) 213 1121 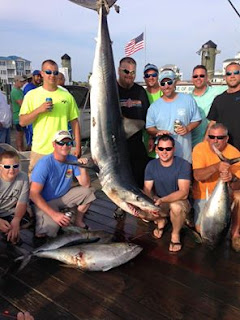