While the fish are biting, there has been an absence of anglers! Today a variety of species were brought back to the docks. Returning from a full day offshore Captain Rob Skillman on the “Moore Bills” managed to land high hook with 6 yellow fin and 2 white marlin. One of these white marlin was Hunter Dortenzo’s of the Ocean City Fishing Center and it was his first, a special congrats is extended to Hunter! Aboard the “Foolish Pleasures” Captain Dale Lisi managed to snag 2 blue fin tuna today the heaviest weighing around 67 pounds, in addition he landed 3 nice sized yellow fin (see photo). Captain Ron Calis took a break from tile fishing and ran the “Reel Addiction” today returning with a 60 pound blue fin tuna, 4 yellow fin and a white marlin release. Inshore fishing was great today, so good Captain Monty Hawkins on the “Morning Star” returned early limiting out the entire boat on Black Sea Bass (<12.5″). Bay fishing was starting to pick up yet the weather but a damper on the fishing this afternoon. Captain Mikey Walsh on the “Bay Bee” returned from his trip early with 2 keepers. The private bay fishing charter the “Get Sum” also had to cut a trip short due to weather but reported throwbacks.
Fishing is great right now, were just missing anglers! Don’t miss your opportunity to fish with Ocean City’s Premier Charter Fleet today!
If you have any questions or would like to make a reservation please feel free to give us a call or stop in we would love to hear from you!
(410) 213 1121 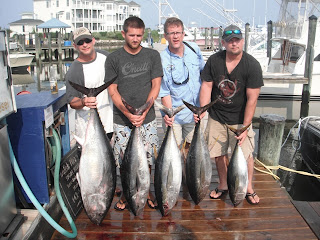