OFFSHORE: Tuna are still being caught and in a few different locations. The “Playmate” with Captain Jeremey Shandrowski was at the hot dog today and had 4 yellow fin tuna and a 105 pound Bluefin. Captain Dale Lisi on the “Foolish Pleasure” also had 4 tuna today, a mako and some dolphin. A few tuna, 3 yellow fin, and 6 nice sized dolphin were caught aboard the “Spring Mix” today with Captain Chris at the helm. It was a mixed bagged today on the “All In” with Captain Mark Radcliffe who reports 2 yellow fin and 2 dolphin. Finally the last boat to bring back tuna today was the “Wrecker” with Captain Jeremey Blunt. The tuna were followed by 2 dolphin. On the “Moore Bills” Captain Rob Skillman had some tuna action and released a few but returned with dolphin. Sharks are still being caught and Captain Ron Taylor returned with a report of 2 mako releases, 4 dusky, and had a few good size dolphin in the box! INSHORE: Bay fishing has still been good and there was some interesting activity in the bay today. The “Bay Bee” with Captain Cale Layton had a good mixture of throwbacks and keepers between his three trips! Captain John Prather on the “OC Guide Service” had 8 keepers between his two trips and high numbers of throwback flounder and bluefish today. (see photo) On the “Get Sum” Captain Nick Clemente had 2 keepers in the morning and 5 in the afternoon along with throwbacks. Don’t miss your opportunity to fish with Ocean City’s Premier Charter Fleet and book your trip today! If you would like to make reservations or have any questions please feel free to give us a call! We would love to hear from you! (410) 213 1121 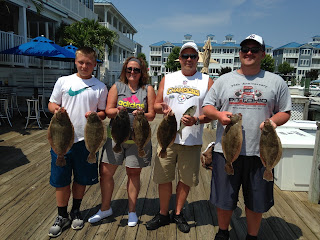