As the OC Shark tournament comes to an end, we had an exciting day at the Ocean City Fishing Center.  The “Game On” with Captain Dan returned this afternoon from an overnighter with a nice sized mako weighing 93 pounds, accompanied by 3 yellow fin tuna and a dolphin. The “Moore Bills” with Captain Rob Skillman ventured offshore and had some heavy tuna action today and returned with 11 yellow fin the heaviest weighing in at 79 pounds (photo below). One of our private boats the “Raine-E-Daze” with Captain David Raine returned with a nice 90 pound mako today as well. Another private boat the “No Limits” reported heavy shark release action today. Flounder fishing is improving and we are beginning to see more throwbacks on the bay headboat the “Bay Bee.” Captain Mikey Walsh on the “Bay Bee” had a total of 5 keepers between his two trips and an exceptional afternoon with 21 throwbacks. Captain Nick Clemente on the “Get Sum” had throwbacks on his morning trip and 6 keepers on his afternoon which were also accompanied by plenty of throwbacks (see below).
The fishing is really starting to pick up, don’t miss your opportunity to fish with Ocean City’s Premier Charter fleet today! We do have make-up charters available for the upcoming months!
If you have any questions or would like to make a reservation please feel free to give us a call or stop on in we would love to hear from you.
(410) 213 1121 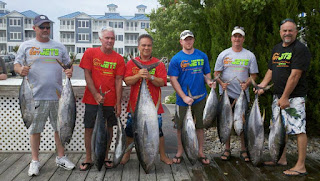 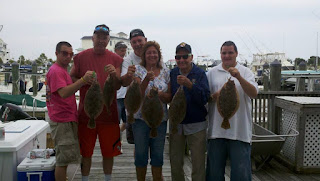