While yellow fin tuna have been quite prevalent for the past few weeks, the blue fin have been quite elusive, until recently. Today we saw quite a few blue fin tuna. Captain Ron Callis who ran the “Reel Addiction” today returned with 2 blue fin, one of which weighed in at 76 pounds and currently holds the new leaderboard position as well as 3 yellow fin and 2 white marlin releases.(see photo) Aboard the “All In” Captain Chad Meeks had a fantastic day returning with 5 yellow fin and a blue fin weighing 74 pounds. On a half day inshore Captain Jeremy Blunt aboard the “Samurai I” released 4 spinner sharks, an Atlantic sharpnose, as well as a hammerhead. Captain Mark Sampson aboard the “Fish Finder” released an abundance of sharks including a hammerhead, an Atlantic sharpnose, a dusky and many more species. On the “Morning Star” inshore fishing for black sea bass has remained steady and Captain Monty Hawkins reports good numbers of sea bass as well as flounder. In the bay Captain Nick Clemente on the bay private boat the “Get Sum” a keeper rockfish was caught (28″>) as well as two keeper flounder (17″>) as well as an abundance of crabs. Captain Mikey Walsh on the “Bay Bee” lead his crew to plenty of throwbacks today, but the keeper flounder were just out of reach. Overall fishing offshore, inshore, and in the bay has been fantastic! Don’t miss your opportunity to fish with Ocean City’s Premier Charter Fleet today. This weekend is gearing up to be an exciting weekend with the Canyon Kickoff tournament held by the marlin club starting tomorrow as well as “Arts on the Dock” so join us for what is shaping up to be an exciting evening!
If you have any questions or would like to make a reservation please feel free to give us a call or stop on in we would love to hear from you.
(410) 213 1121 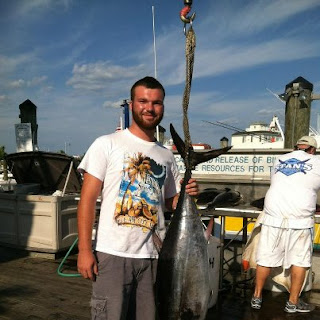