Just when we started to see a tuna bite wind down it picked right back up today. Most of our boats landed yellow fin or blue fin today while trolling at the canyons. The “Playmate” with Captain Jeremy Shandrowski returned today around 2:30 with their limit of yellow fin (21). The fish had a total stringer weight of 300 + pounds. (photo) Aboard the “Instigator” with Captain Dave Wentling at the helm the crew returned with a nice sized blue fin tuna, 2 yellow fin and a dolphin. Captain Rob Skillman on the “Moore Bills” landed a total of 8 yellow fin while trolling today as well as a dolphin. An impressive wahoo was caught aboard the “Why Not” with Captain Wade Lober. The fish weighed in at 105 pounds and now holds the current leaderboard position. (photo) . Just in time for the white marlin open the “Reel Attitude” released two white marlin today. One of our private boats the “Luna-Sea” with Captain Larry Dougherty returned with a box full of yellow fin for a total of 20. (photo) Another private boat the “Tuna-Dog” with Captain Aric Gilley had a good day with 3 impressive dolphin. Closer to shore the “Jade II” with Captain Ed Kauffman took a half day inshore and returned with 20 bluefish of various sizes. Captain Mark Sampson aboard the “Fish Finder” also fished inshore today and returned with a report of a variety of shark species. Bay flounder fishing today was good; Captain Nick Clemente on the “Get Sum” managed to snag 2 keepers on his morning trip, as well as his evening among the many throwbacks. With Captain Cale Layton at the helm of the “Bay Bee” customers returned happy with a report of plenty of throwbacks and few keepers.
In just two days the White Marlin Open will begin and our captains are preparing and hoping for a great week of fishing. We wish everyone that is participating in the tournament the best of luck! 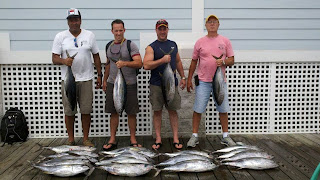 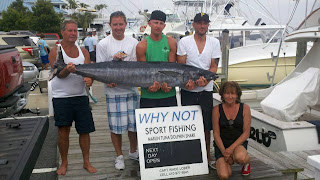 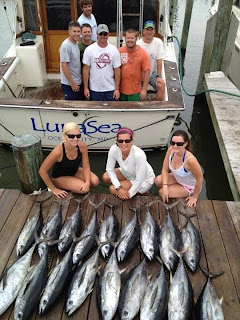